For a shipper, few decisions get bigger than trying to determine if it should operate a private fleet or use a dedicated transportation carrier to get products from point A to point B. It isn’t always easy to ascertain what makes the most sense for its business — especially when misconceptions about private fleets are pervasive.

On the surface, private fleets may appear to be the hands-down better option, but that’s not always the case. To evaluate which option is truly the right fit, a shipper must recognize and understand the reality behind running a private fleet as compared to what a dedicated provider can offer.

Capacity is guaranteed for shippers that run private fleets

It appears as though a shipper with a private fleet would have guaranteed capacity, with the ability to deploy its fleet to move freight as needed. In reality, a private fleet capacity is fixed or rigid, with little to no flexibility. Many shippers either have too much equipment, which then sits as an unused fixed asset, or they don’t have enough equipment, causing them to look to the spot market when capacity needs fluctuate.

Drivers who run the same route are in a unique position: They get to know the customer and form personal relationships, they have an intimate understanding of the customer’s business and unique requirements, and they exhibit a sense of pride in being a committed driver for a sole customer.

While drivers can have that while working as part of a private fleet, they can get those benefits — and often times more — when working with the same customer as part of a dedicated operation with a transportation provider. Drivers on a dedicated account get the benefits of work-life balance in that specific driving configuration, along with achieving carrier milestones, which are incentives for them to perform at a high level. This consistency minimizes the likelihood of drivers quitting and provides regular challenges to keep the job interesting every day.

Shippers must remember that a private fleet requires a high level of monitoring and administration. Maintaining a private fleet comes with its own set of challenges and requirements — all of which can divert time and assets away from the main business function.

While a private fleet can provide a company complete control of its entire operation, it can also generate additional costs. Those unanticipated costs are hard to plan for and can negatively impact the bottom line if they become excessive. There are standard costs to oversee, such as fuel, total operating cost per mile and driver compensation, and, on a larger scale, truck maintenance, equipment and technology.

Operating costs can be divided into vehicle- and driver-based categories. Vehicle-based costs include items such as fuel, repair, maintenance, permits, licenses and tolls. Driver-based costs include wages, benefits and bonuses. Combined, a shipper - or transportation provider - can calculate the cost per mile of its shipping operation. Cost per mile shows the total operating expenses of a truck for every mile driven. Knowing this number allows shippers to quickly determine the profitability of the loads being delivered - and whether the current transportation configuration is positively impacting the bottom line.

Fuel alone can account for approximately 30–40 percent of a motor carrier’s cost per mile. Major weather-related disasters can also greatly impact fuel costs due to closed oil refineries unexpectedly increasing that fiscal line item. The price of this necessary resource fluctuates constantly, making it a volatile line item to plan around. 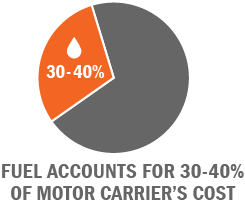 Truck repair and maintenance are also difficult to accurately plan for. The age of the trucks and trailers, the vehicle configurations used and the equipment technologies installed, all impact the annual spend on a fleet. Between 2015 and 2016, repair and maintenance costs rose by 7 percent, reaching $0.166 cents per mile — the highest level the American Transportation Research Institute (ATRI) report has recorded since it began its analysis in 2008. This can be attributed to the fact that trucks are being tasked with driving more miles due to increased demand. Additionally, the more technologically advanced the truck, the more it can cost for repairs and maintenance on its sophisticated machinery.

Insurance premiums, permits, licenses and tolls can account for upward of 10 percent of annual transportation costs — and sometimes more for specialized carriers. Permitting and licensing is volatile due to the industry’s heavily regulated nature, and depending on the region of operation, tolls are another large cost to consider. Tolls have increased sharply in recent years, making them a component that needs to be accurately accounted for. Many states are looking to tolls as a potential way to fund infrastructure deficits, which means the price may increase even more as the most egregious infrastructure shortcomings are rectified.

Managing these necessary costs ensures trucks are maintained and capable of transporting freight safely and on time. However, when there’s product to manage and customers to serve, keeping a keen eye on transportation amounts to a lot.

Salaries, benefits and bonuses are a costly necessity to attract and retain drivers. The ATRI report reviewed driver compensation and found that the average salary was 52.3 cents per mile in 2016. Translated to hourly wages, it becomes $20.91.1 This marked the fourth consecutive year that both driver wages and benefits increased, making it the biggest financial component for motor carriers. Additionally, driver benefits, which range from full medical, dental and vision coverage and 401k matching, increased to 15.5 cents per mile, marking an 18 percent increase from 2015.2 This drastic increase shows that salary, benefits and other indirect rewards are critical in attracting and retaining drivers.

An optional, but increasingly common, financial incentive is bonuses. Across the industry, transportation providers have become accustomed to providing bonuses to drivers, awarding them for signing on with a company, reaching safe driving milestones and adhering to on-time delivery standards. While the average dollar amount varies per person and/or the reason for receiving it, this becomes another area where costs quickly add up when calculated and applied across the entire fleet.

In addition to the hard costs of paying for drivers, shippers also need to contend with training and managing them. Shippers that operate their own private fleet need to ensure they have the proper logistics in place, such as ongoing training opportunities and driver business leaders, to adhere to and run a smooth operation.

There are costs that must be accounted for that demonstrate compliance to the reporting agencies. Safety technologies, ELDs, telematics devices, drug testing and compliance management software are examples of what shippers managing their own fleets need to be aware of and use routinely — or be designated non compliant. Depending on the severity of the infraction, a shipper will face citations, regulatory penalties, driver complaints and delayed freight if the fleet is placed out of service. If freight is not moving, that puts a strain on the customer, who is relying on product availability according to set schedules. A delay can result in lost profits for the customer because product is not available and tarnish a shipper’s reputation — both of which are detrimental for business.

Fleets that run a lot of empty miles, coordinate multiple stops, run intricate routes or require complex distribution demand a significant amount of time and coordination. All of these business moves can negatively impact the bottom line. Running empty miles is especially detrimental for business because it wastes fuel, money and time. Coordination efforts for more advanced transportation needs require constant support and evaluation to ensure efforts will be executed properly. The constant monitoring and configuration demand a lot of time, further diverting employee attention away from other responsibilities.

Industry wide, recruiting and retaining drivers is a challenge. To complicate matters further, the industry is falling well short of qualified drivers. The demand for freight movement has increased, while driver capacity has tightened. The American Trucking Association says 70 percent of goods consumed in the U.S. are moved by truck, but the industry needs to hire almost 90,000 workers per year to account for replacing drivers and industry growth.3 That’s a large gap for shippers and carriers to fill. Private fleets have historically had lower turnover; however, continuing to attract a new generation of workers to the profession — and fostering their development so they stay — is going to be an ongoing issue to contend with.

My (small) staff can handle all transportation needs

Adhering to the many regulations that govern the transportation industry increases the burdens placed on shippers opting to run and maintain a fleet. A private fleet means shippers assume all the risks and liabilities inherent in transportation, which can be complex terrain to navigate.

An ever-changing regulatory landscape requires constant vigilance to ensure adherence to the rules. With a diverse number of specialized issue areas, effectively managing compliance necessitates a dedicated staff of full-time employees (FTEs) who specialize and manage a particular issue. Industry compliance is a necessity if freight is to keep moving, making it an important factor to consider when determining whether running a private fleet is beneficial.

When self-managing a transportation fleet, it’s easy to maintain the status quo versus actively looking for ways to improve the supply chain. The old adage of “if it ain’t broke, don’t fix it” comes to mind, but that doesn’t mean it’s best for business.

Dedicated providers find the most optimized solution, designing it with the shipper’s supply chain in mind while ensuring that specific business requirements are met. During the optimization process, it’s common for savvy providers to find efficiencies simply by bringing in alternate types of equipment. If a shipper is contractually bound to equipment that’s not right for the job, transportation spend is inherently (and negatively) affected. A dedicated transportation provider is able to identify and acquire the best equipment for the job.

Shippers who transition from a private fleet to a dedicated carrier can often achieve the same visibility and commitment to quality at a lower cost. Transportation providers with a large truck network and a variety of specialty equipment ensure that every shipper receives the prioritization and service it deserves. Additionally, carriers with a diverse portfolio can execute services that are harder to do, ensuring shippers that their cargo will arrive safely and on time.

To make a transition as seamless as possible, most carriers can absorb a shipper’s existing fleet and drivers. In other words, the shipper retains most of its knowledgeable and experienced driver base without having to oversee its management. This transition also means that shippers will have guaranteed capacity, with the ability to add capacity during peak periods. This division of responsibilities between shipper and carrier allows each party to focus on and implement what it does best, maximizing efforts and resources.

Working with a transportation company to employ a dedicated fleet gives shippers many of the benefits of owning a fleet, without the direct responsibility of managing it. Plus, it often delivers an overall lower transportation spend. The provider assumes all the risk, allowing the shipper to remain focused on the foundation of its business — and the next big decision necessary for further growing the bottom line.

We have the solutions and services you’re looking for.
Let's work together to optimize your supply chain.

What's impacted your industry recently? Sign up to stay in the know.